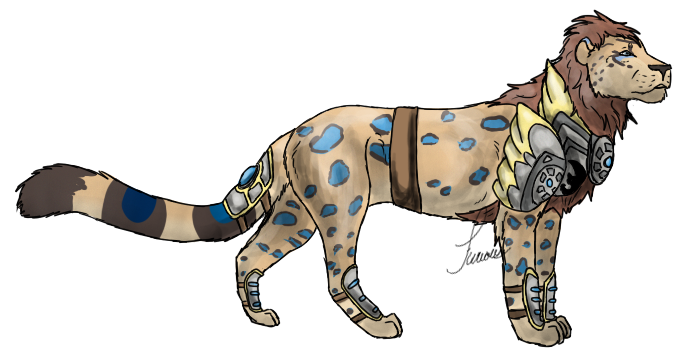 Hlunigawaqai - Art by: http://furiouswolf.deviantart.com/
The Siinga (Kaithan: 'Shiłlàn') are a large feline species, resembling something of a cross between a male lion and a snow leopard and measuring approximately 3.2 to 3.6 meters in length on average, with the largest individuals reaching lengths in excess of 4 meters. They are sleek, powerful hunters, able to move in almost complete silently when stalking their prey. Both males and females have manes. Their coats are usually brown or gray and dotted with spots, these being either black, white, or gray on females and a variety of colors on males. The Siinga are native to the mountains of Tshékayìþàn, but were forced to leave the region and move south after many years of tension with their more numerous Ðiułhav neighbors.

Most enjoy a nomadic lifestyle, living wherever they can find plentiful food. They rarely form close friendships and prefer to keep to themselves, traveling alone or occasionally in pairs. They are not inherently aggressive or territorial, but they are strong and willing to stand their ground and fight if provoked; thus, others tend to leave them alone. Sexes do not normally mingle, except when seeking a mate, and are not prone to developing familial ties: pairs stay together only to the end of the pregnancy to see that the cubs are born safely. The males then depart and the females raise the cubs alone, sending them away at two years of age when they are fully grown and capable of fending for themselves.

Despite having a language of their own, Siinganavaqanni, most Siinga use Kaitè or Tsinka as their primary language, and many do not speak Siinganavaqanni at all or have only a limited understanding of it.
Powered by